Today is the first day of school here.

So far we have one missed bus, one forgotten pair of glasses and some confusion as to where we were going first thing in the morning. 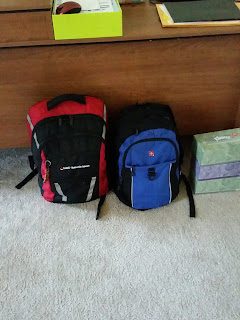 There were backpacks stuffed with pencils and binders and composition books. Not to mention enough tissues and hand sanitizer to prevent the zombie apocalypse.

(I can't imagine why there are crazy super lice)

All in all not a bad beginning to another school year.

You know that feeling you get when you think you are reasonably good at something but then you are forced to be judged? That twisting in your gut? That moment when all your self confidence leaves?

Like when you create something and then you put it out into the world to be judged? (not like on YouTube, those people are trolls and they live to be cruel)

Actually this isn't about the blog. Although of course the fact that I am writing in the blog means that the above statement isn't true.

But why should today be any different.

Have I mentioned before that I do it a lot?

Like all the time. In the house while I'm cooking or cleaning. When I mow the lawn or clean the cars. When I'm painting, or building, or clearing the gutters, or any number of other things. (I seriously do all these things because I'm that good.)

I LOVE music and I'm not sure how anyone gets anything done without it.

Right now there is some fantastic Jazz on thanks to SONGZA. No singing and typing. I have a hard enough time expressing myself.

In the car I'm the worst. Singing at the top of my lungs with the windows down. God forbid you get stuck next to me at a red light. For some reason I've never cared about that. It's not like I'm going to see those people again. They can judge away.

The last time I sang in public though was 8th grade. I sat on a lone stool in the middle of the stage in some ridiculous peasant skirt and sang Bette Midler's Wind Beneath My Wings.

I know right? You can just picture the awesomeness of it. Hard to imagine I was ever that cool.

So I'm not going to do the math but that was a LONG time ago.

Now I've sang in the car with my friends and at parties where the music is so loud I could sound like a dying pig and no one would notice. People have said nice things but I've always shaken them off. They are my friends after all. It isn't as if they are going to say cruel things even if my voice resembled the howling of goats.

At least I'm pretty sure they wouldn't. They aren't the type of people to offer false compliments. Or maybe they are but I have such a high opinion about myself I can't fathom that everyone else wouldn't think I was awesome too?

Either way no one has ever begged me to stop.

So this past weekend there was a big party for a very special lady. We seriously had planning meetings and a god damn sign up genius to make sure everything was perfect. and for entertainment we had a karaoke machine. I mean an honest to god karaoke machine with the lyrics up on screen and microphones and everything. 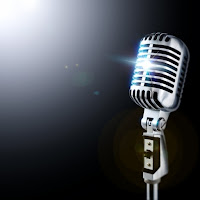 How can this not be fun?

When you know you aren't any good you don't care about being silly and having fun. It's not like we were auditioning for The Voice. This was all in good fun.

That is of course unless you think you have a half way decent voice. It's a truth you've always held but have never tested for fear that someone would prove you wrong. That someone would crush your little hypothesis.

But then you do. You sing without the mic because you really don't need the amplification and not only do your friends say nice things (seriously starting to wonder if they would lie or not. Note to self. Wear an UGLY dress next time out and see if anyone says anything) but their husbands do too.

So you get to keep that secret little fantasy where you totally could have been a professional. Serious. I'm just one chair turn away from being the next Kelly Clarkson. If Blake or Adam heard me you just know they would turn their chairs. 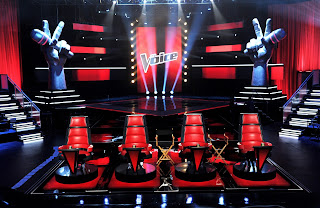 Or I'll probably just go back to singing in the shower.

Either way it's a pretty awesome life so I'm not going to complain.