And just in case you were curious my green notebook is still blank.
- January 27, 2015 1 comment:

Welcome to my blog.

Did you know that some bloggers update theirs blogs more than once a week?

Crazy right? Yeah I thought so too. I guess I just don't lead a very exciting life. Part of the problem is also that when an idea pops into my head I think to myself that I am possibly the cleverest person ever, surely I will never forget this very clever idea.

Guess what. I forget them all the time. I remember that I had an idea but for the life of me I can't remember what it was.

Hence the title of this blog. The kids and I went to the bookstore the other day and you know how they load the sides of the check out aisle with crap they want you to buy? Yeah Of course you do.

Well I bought something. 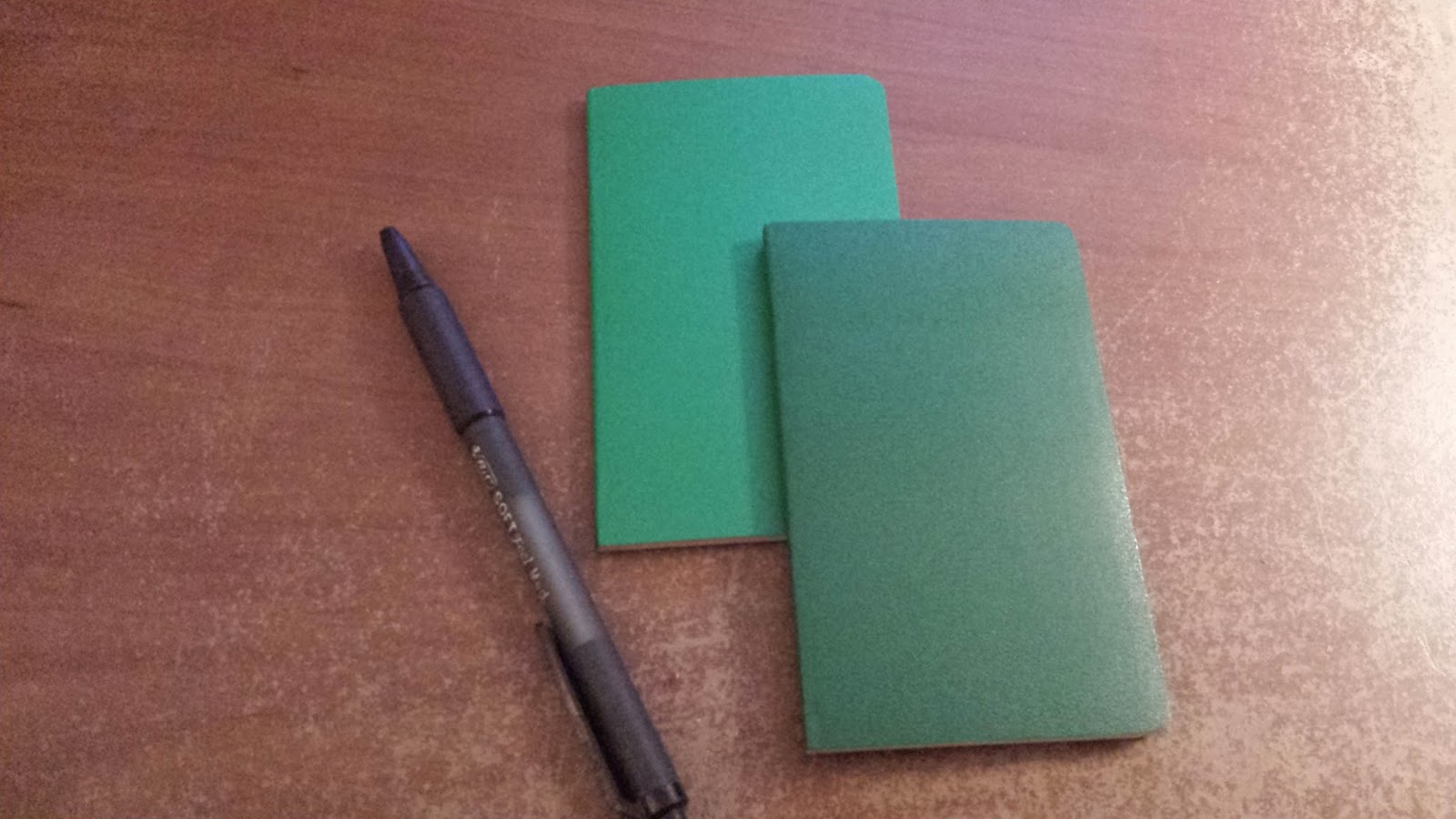 Now I would have a tiny notebook to write down my brilliant thoughts.

FYI I didn't buy two thinking that I would have so many brilliant thoughts that I would fill up the first one and would require a second one. They came in a two pack.

Either way I'm ready to write some stuff down. 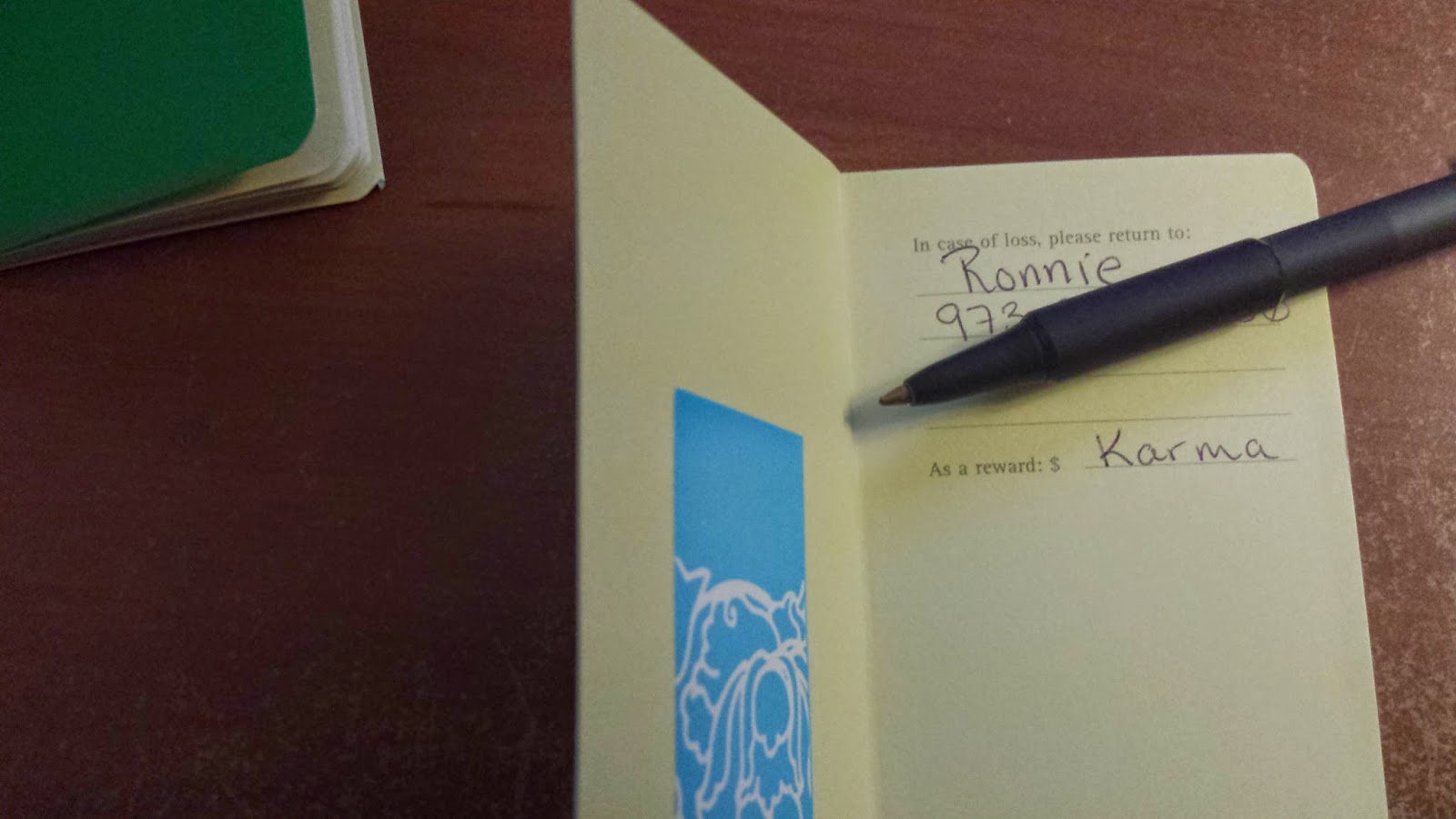 Please note you can add a reward for if it's returned. Sadly although I think my thoughts are beyond priceless I'm not willing to offer 10's of 100's of pennies as a reward so it will just have to be Karma.

I would like to say that these notebooks bode well for increased posting but lets be honest, that isn't likely.

Today is Thursday and it is my weekly routine to enjoy lunch with my favorite female people. You might remember I've talked about this before because it was at our regular lunch outing that I was vividly reminded of my past life of 9-5 grind.

Today though as I walked into the restaurant I glanced around. A quick headcount lead me to a startling realization.

I KNOW TOO MANY PEOPLE.

I counted. There were 23 people seated and eating and I knew 10 of them. That's almost half.

We've lived here for 4 and half years and apparently I know 17,000 people. At least that is what I'm assuming based on my extensive knowledge of statistics and other analytical math.

That's too many! Too, too many!

So that's it people. No more saying hello to strangers. I'm done. I've maxed out.


As a side note I also saw a man I'm going to refer to as hipster Sea Captain. I got a really blurry picture but I'm not going to post it based on the above tirade. I'd feel pretty bad if it turns out that he is someone's son.

Yes of course, I know he is someone's son, I guess what I mean is that he might be someone I KNOW's son.

Email ThisBlogThis!Share to TwitterShare to FacebookShare to Pinterest
Labels: Old Life, The Past

Triple S and I just spent some quality time upstairs sorting through all the extra cords we have from years of chasing the ever upgrading technology demon.

You know the one I'm talking about. where as soon as you buy something they tell you about the "new and improved" version that will be available in just one more week.

We love gadgets in this house. Do you sell something cool and fancy that can bring me one step closer to a robot run home? Then I'm interested.

Examples of our craziness include being on the waiting list for the first tivo that was Direct TV compatible. Sure DVRs are common place now but back then the concept of recording your shows and fast forwarding through the commercials was insane. God how I loved that thing.

Although I never had a T Mobile sidekick I did have one of the first camera phones. Sure the pictures were so blurry it was hard to tell if I was sending you a picture of my foot or my dog but it was still a picture I was sending by phone.

I know if you are young you are reading this like I'm insane but this is my generation's "uphill both ways" speech.

"When I was a kid we had to get up to change the channel."

Remember I told you we had this camera and that I used it to take pictures on my honeymoon back in 2000? Yeah well Triple S found it in the pile of random cords.

Apparently we truly never throw anything out.

PS I'm typing this from my new Christmas present. A touchscreen laptop. Because I do love a cool gadget and apparently Triple S loves me.
- January 10, 2015 No comments: