Heard this on the radio this afternoon.

If I were gay I wouldn't lose too much sleep over this. They haven't been 'embracing' the female population either. Unless you like being called a ho in which case your welcome.

I don't say this to bad mouth rap. I grew up in the 80s and the 90s. At one point I knew all of the words to 'Nuthin' but a "G" Thang' and I love the Beasties Boys. (I'm singing Sabotage in my head right now.)

You can of course argue that none of that is rap but that isn't really the point.

Time is the universal equalizer.

Things that were so forbidden that we couldn't even talk about them are common place 100 years later.

I hope Gay rights don't take that long but in the mean time it's always nice to see someone say F U with a smile and say how they feel. Even if their 'peers' might not agree. 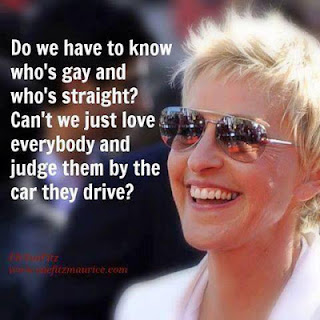 So the supreme court got rid of DOMA. I'd like to think after a millions papers written about equal rites and marches and protests and people standing up against unbelievable odds it was all thanks to my blog.

Congratulations to humanity for taking one step closer to equality for all.