It was a lot more Lord of the Flies than Sisterhood of The Traveling Pants.

So far the awesome ladies from the gym have talked me into some entertaining stuff.

There was the Zumbathon. 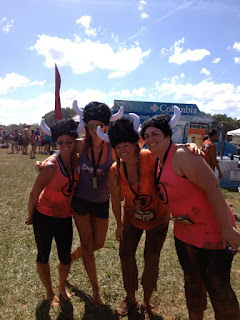 Basically all things that could have killed me. Or at the very least made me extremely tired.  So when the idea of a girls weekend came up I jumped. Who doesn't want to spend the weekend with a bunch of awesome ladies eating and enjoying the view?

I imagined relaxing and movies and maybe a nice walk in the woods. Cake. I was sure there was going to be cake involved somehow.

What I got was 2 spit takes.  How is it possible that these ladies are still shocked by anything I say?

A collaborative dinner. We turned cooking into a team sport like on Iron Chef.

And a 6 mile hike up a GOD DAMN MOUNTAIN!!

Seriously it was straight up. Stone steps placed into the side of the mountain! Plus I was carrying a backpack with water bottles and cell phones and a gun. Apparently there was a chance of running into a bear. This was only going to be possible if that bear was deaf or had been hand raised by humans and was looking for his adopted mother.

Still a chance. Plus it helped lend some credibility to my frequent yelling of:

There was also some other colorful language as it became clear my gentle walk through the woods wasn't going to be quite as gentle as I imagined.

All was forgiven though because there was cake, and steak, and chocolate covered strawberries, and bubbly water, and lots and lots of laughs.

Oh and I got to rewire the DVD player because that's just how I roll.

The ladies are talking about going away to the beach next summer. In my head I'm imaging chilling on the sand with a good book and a cold drink. I think the reality is more closely going to resemble swimming the English channel.
- August 20, 2013