Could You Recognize Your Spouse's Dismembered Body?

This was the conversation Triple S and I had yesterday. It started simple enough. (As it usually does.)

I was pointing out to him that I had a birth mark on my leg. You know just in case I'm involved in a horrible accident and dental records and fingerprint aren't a viable identification method.

He told me that he was going to make a mental note although he couldn't make any promises. He further posited that he didn't think it was likely that he would be able to recognize his own severed limb.

Say out of a lineup of 5 severed legs. Because that is a likely scenario.

That is when I suggested we get identifying tattoos. Like code numbers on each limb.


Suspicious detective: "Ma'am we found a leg in the harbor. We need you to confirm it's your husbands."

Suspicious detective: "No it has an 11."

I love that Blogger tells you who is checking out your blog.

They let you know that you are super popular in Russia. (not because that is where all the baby spambots are born but because I can totally relate to people who consume on average 4.8 gallons of alcohol a year. We know that's my jam.)

I know I see it in my nightmares all the time.

In recent weeks "KFC Mutant chickens" has been bringing the most traffic to this little blog because everyone knows this is where you come for important information about mutants and fast food.

Today though someone went to Google and typed in "badman and superman parents".

Now that isn't a typo. Well it isn't a typo on my part. We know how I feel about Batman. I would never call him badman. That sounds like a discount knock off about Brant Woyne and his trusty manservant Andrew. He uses his millions (not billions because we are in a recession) to fight crime in Metrocity all the while dressed as a rat. There is no flying rodent comparison for him because that is too expensive and there isn't a board on pinterest with discount ways to build wings.

You can make your own meme here if you are bored or insane or any combination of those two things.

One last thing before I go. 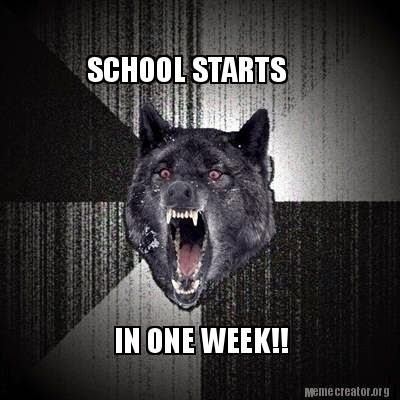 that meme generator is dangerous!

The Joys of Parenthood. Part 763

Sometimes I wish I was a much meaner person.

Or at least I didn't care about human niceties. You know like holding the door, saying good morning, letting people merge.

Sociopath? Yeah that would have made today a bit easier.

What happened you ask?

Nothing life changing or sad. (I've mentioned before this ain't that blog.)

Sit down and let me tell you a story:

It started on Wednesday when we arrived at my son's music lesson only to find out his current teacher was gone. No one told us. So instead of continuing my son on his path to super stardom we stood there for 30 minutes until we could arrange for another time.

We headed back tonight to start with a new instructor. Number 5, apparently no one wants to teach my son. (This isn't true at all I'm just complaining. Obviously he is my kid and we routinely get calls from the Van Halen's about his talent.).

Apparently though someone forgot to update the super high tech excel spreadsheet they use to schedule the lessons and they had double booked the time. Of course, since we were one minute late the other lesson had already started and by the time we figured out what was going on another 30 minutes had passed and it was someone else's time.

Luckily I had fed the kids before we headed over there.

Or not, as the case became when Colin told me he had just thrown up in their bathroom and apparently didn't do the best job with his aim.

Now we've been waiting awhile and I can just leave and make it someone else's problem. If I was a sociopath that is totally what I would have done.

I didn't though. stupid conscience!! Instead I got to go into the store's bathroom, where only men work, that really isn't open to the public, and clean up my son's vomit.

Now I want you to think for a moment about how I described the bathroom.

Have you pictured it in your head? Are you somewhere between youth hostel and frat house? Good because that is pretty accurate. Luckily there was pine sol and paper towels.

Pretty sure it is now cleaner than it has ever been. I, of course, feel the need for a shower.

So over all a fun day.


NOTE: Yes I am aware this is what the Internet call a first world problem. I'm not bemoaning the state of my tragic life. I just thought there can never be too many good stories about vomit.
- August 17, 2014 No comments:

I know I've mentioned this before but I am a serious GEEK.

For the most part I don't make general announcements about my proclivities. Sometimes though I feel my insane love for something start to bubble to the surface and as the words start to leave my mouth I hear myself getting more and more excited about my obsessions.

This happened the other day when someone mentioned Doctor Who. 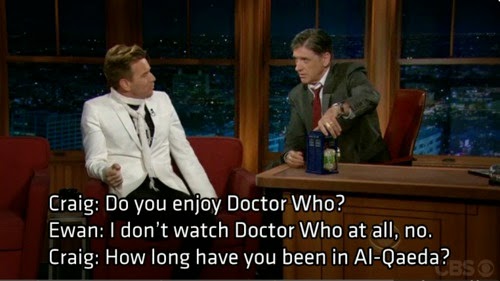 They simply said they hadn't really liked the 2005 reboot.

One simple statement and I felt my insanity bubble up. I started with one comment about why they were wrong and it spiraled into a 20 minute diatribe about how Doctor Who is awesome.

I kept remembering my "favorite" thing. One after another and they were coming out in a disjointed stream of consciousnesses rant.

Now if you love Doctor Who then you can understand that trying to explain it on the best of days makes you sound crazy but when you're excited it gets worse.

In my head I could hear myself getting ramped up but I couldn't seem to stop it. My crazy was spilling out for everyone to see.


Good news though. A few weeks have passed and no one seems to be giving me the side eye so I guess a little crazy is forgiven.
- August 14, 2014 No comments:

It was all Brave New World references and religious freak outs. People love a good slippery slope argument. To prove how scary this was we made movie after movie where we cloned people with horrible consequences.

Both of these movies came out the same year as Dolly.


Now if you are a conspiracy theorist you won't believe this next part so just pretend I'm a puppet for the man and keep reading.

Nothing happened. No animal people hybrids or nightmare diseases that brought about the long awaited zombie apocalypse. Nothing other than a few other medical experiments that we promptly forgot about.


I'll admit I never really cared although that had more to do with my age than any real apathy for the subject.

I care now though.

There are two movies in theaters right now that make the idea of animal experimentation seem either awesome or terrifying.

Dawn of the Planet of the Apes


Guardians of the Galaxy


Both have talking, intelligent animals that make it much harder to pretend animals don't have souls.

They are making me think hard about cloning. On the one hand if it means monkey overlords and human subjugation I'm totally against it but on the other hand if Rocket can be my new best friend I might have to start writing my Congressman.