Here in the South the temperature has dropped. And by dropped I mean I can open the windows and begin wearing three quarter pants. Possibly even long sleeves. Certainly not full pants though. It's got to get a lot colder for that level of craziness.

At least for me and anyone else newly relocated to the South from the North.

We don't wear jackets in this family. In fact on the few occasions it has snowed it has been all I can do to get my kids to wear fleece.

Triple S hasn't worn a jacket since we moved here. He's all about the hooded sweatshirts which wreaks havoc on my laundry but that's a story for another day. Apparently he seems to think they are one time use and only about 3 fit in the damn washing machine!

Back to this morning. There were pants and fleece as far as the eye could see at the bus stop. There was panic and fear. There was talk of bread and milk.

OK so that didn't really happen as no one who lives in this neighborhood is actually from the South. But this is the time of year that the true Southerners start to freak out.

They bundle their kids up and dress in ridiculous layers.

Of course all of this seems insane as by noon it's sunny and 85 degrees. 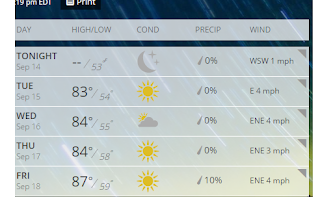 I'm going to smile though because I know the cold doesn't mean the snow is about to start. It doesn't mean salted roads and power outages and closed school.

Okay it totally means closed schools but who cares? I won't have to shovel ever two hours to make sure the snow doesn't get to deep for me to leave the house. HAHAHAHAH.

I wont have to leave my Christmas lights up until April when the ice on the house finally melts and I can remove them. Of course by then the squirrels will have chewed through most of the wires so I will only be taking them down to throw them away.

I don't even have an ice scrapper in my car anymore.  That alone makes me giddy.

I remember The Big Recco used to keep a shovel in his trunk because once he got stuck digging his car out with a three ring binder.

It's possible that was just a story and that the shovel was for other purposes.

Whatever. You know what? The South is awesome.

Remember way back when I was concerned about the 4 legged chickens?

Luckily those sad animals seem to have been rescued. Or eaten. I'm not sure since the Internet seems to have lost interest in them.

Don't worry too much about it though because the Internet has something else you should feel bad about.

Danish people are awesome and show serious respect to their elders.

Not us though. We are horrible and should take a long hard look in the mirror. Or some other soul searching activity. Staring out a window on a rainy day perhaps? Maybe sitting quietly at a coffee shop while you drink you bitter mochachino? 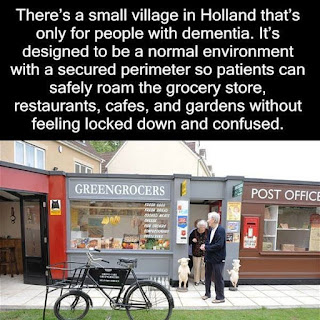 This is the picture that has been popping up all over social media again.

Notice anything amiss? Out of place?

Remember the part where they said this was in Holland? You know. That country that speaks DUTCH!!

Yeah I don't speak any Dutch either but I know they don't call a post office a POST OFFICE!

So of course being the eternally cynical person I am when it comes to the Internet I questioned the validity of this picture.

So off I went to search the World Wide Web hoping that Snopes would have something.

Imagine my surprise when I found this:

It's real!! Seriously. This is the news story from 2013 on CNN! CNN people. No one is infallible but CNN is at least slightly more reliable than most other Internet news sights. Plus since the story is 2 years old it's not like people haven't had time to dispute it.

I'll just be sitting in the corner sipping my tea while I rethink my world view.