Before I start my rant I just want to see if I got this straight.

You think you found the link that proves KFC has mutant chickens on a farm somewhere?

Where is this farm? Indiana? Montana? (Seriously I have no idea where we raise chickens?)

How come PETA isn't freaking out?

You remember PETA? They want us to treat mice as equals to humans. They have that catchy slogan "meat is murder". I guess the lesser know part of that is "except for genetically modified meat."

Alec Baldwin can't eat a bagel without someone taking a picture but no one is paying attention to a farm where featherless chickens with extra legs frolic in beautiful green fields? (I have lawn envy.)
By the way KFC changed their name in 2005. Almost ten years ago. A decade of mutant chickens and no one noticed.

In the last few years people have been losing their minds over Monsanto and modified corn (GMO) but apparently no one cared about the chickens.


I for one almost wish it was true because it would bring us one step closer to real mutants. I'm hoping for some really cool powers like mind control or invisibility. Nothing stupid like being able to talk to fish or control the weather.

PPS: This is why we keep getting emails from Nigerian Princes. If you are going to believe this stuff certainly you will also believe he just needs someone to help him get his money.
- February 28, 2014 1 comment:

Hairstory: living on the scissors edge.

So back when I was about 12 I got a really short hair cut. A pixie some would call it. It wasn't something I wanted or thought was a good idea but I tried to convince myself it would work out.

Right about this time there was a commercial for Doublemint gum that featured two reasonably attractive women with short hair.

Look how carefree they are in their matching tennis sweaters. For some reason I remember them having a tandem bike and yes I know that isn't helping my case.

Stop judging me. It was the 80's dammit!

In the end though I really didn't have a choice, you see a few months before I had been talked into a perm. Oh yeah! The kind where you sit at the salon for hours with that horrible stinky stuff on your head.  I was never crazy about that idea either but remember it was the 80's.

Needless to say it turned out awesome (sadly I don't have any pictures so you'll just have to take my word for it.). The problems started not long after because I was on a swim team spending way too much time in over chlorinated pools.

By the end of the season my hair was so fried it was breaking off in my hands. Drastic measures were necessary. So I convinced myself that I could pull off short hair.

So off it came. Along with it went any chance of me outgrowing my awkward tom boy appearance until it grew back. That was fine though. I survived and vowed I would never cut my hair short again!


I'm no Audrey Hepburn that is for sure.

Who cares about your hairstory (that's like history and hair mashed together)?

Good new word! Chill I'm getting to the point.

If you've been reading this blog, and obviously you have because you are here right now, right? You know I did it again. A little over a year ago I walked into a salon and cut it all off! Not sure why I decided too. Guess I was getting bored and changing the color every other month was wearing thin.

Whatever the reason I cut it off and was pleasantly surprised. I actually like it short.

Wait. What was my point again when I started this?

Oh yeah. It was crazy hair day at preschool this week and for the second year in a row I sported a Mohawk! Yeah that's right. I spiked that stuff right up. 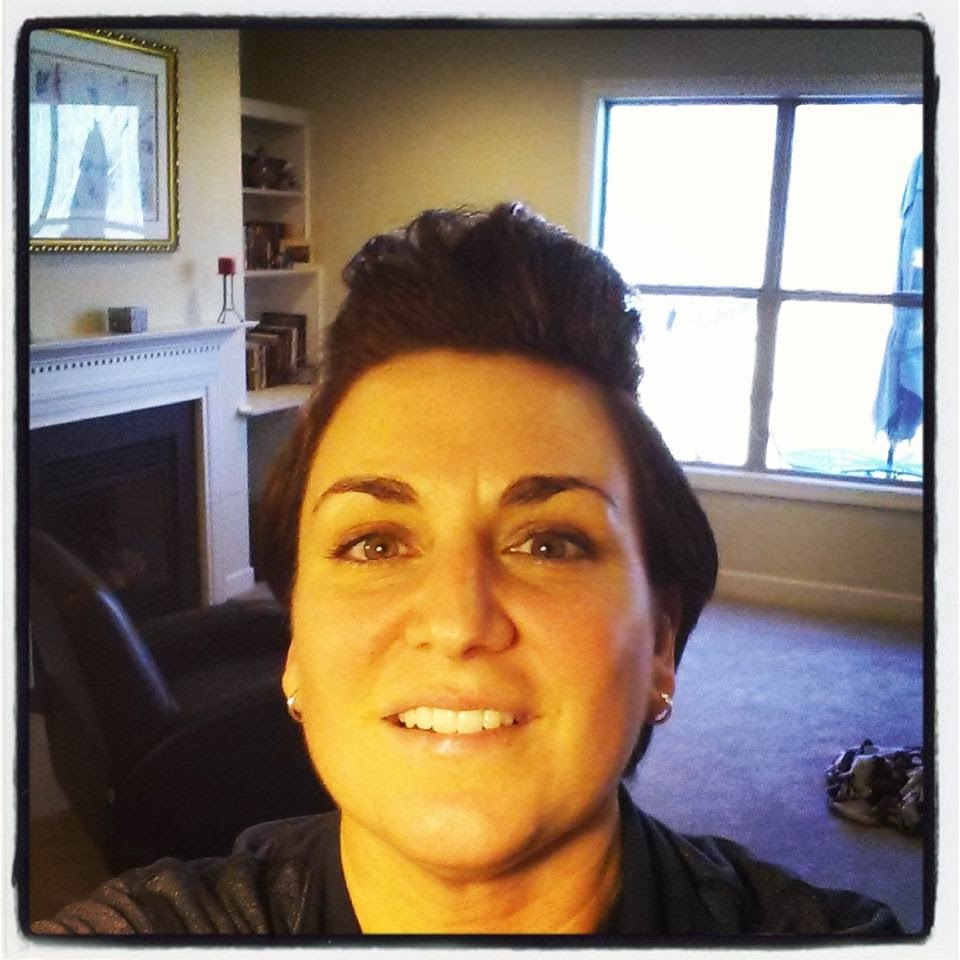 This is this year's fabulous look. Admittedly it is more Elvis than Mohawk. But I still look BA.

Thank you, thank you very much! 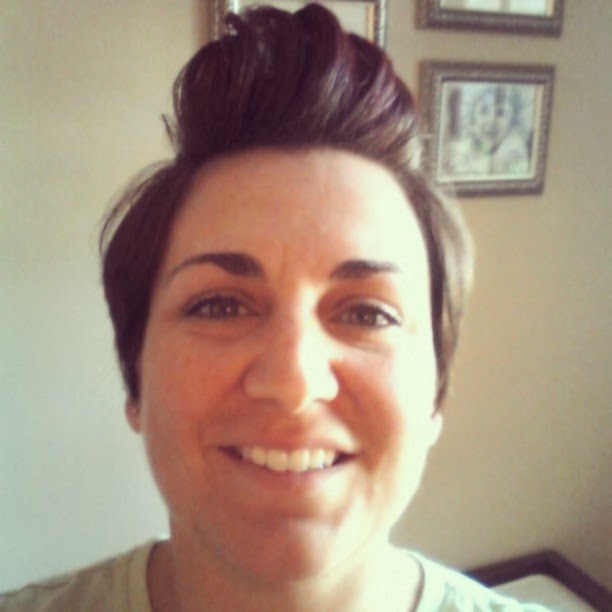 Last Year it was the perfect FauxHawk.  It was red too although you can't tell that from the picture. Also I went out to eat with all the ladies from the school looking like this since they just switched their pigtails to pony tails I was the only one who looked like a lunatic. BEST PART was the people who saw me who didn't acknowledge my hair.


I'm not sure if I should be insulted or pleased that this is a look people think I might try? HMMMMM


So yeah. This is the kind of stuff I do now. I'm not sure if 12 year old me would think it was awesome or not but one thing is certain. If I find a green sweater vest I'm going to rock it! 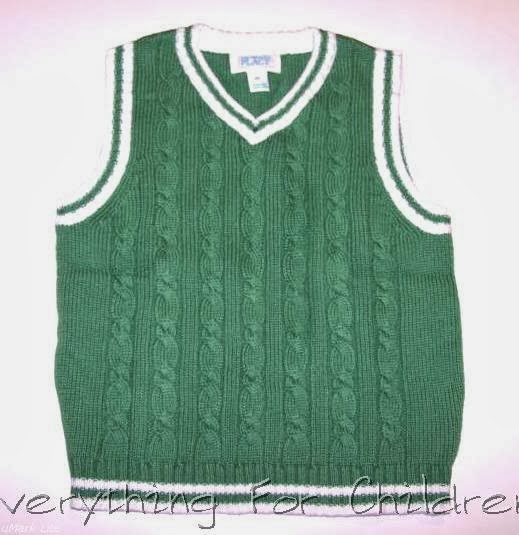 So far I've only been able to find a child's size but I'm not giving up!

PS Another advantage of short hair is horns in the shower. Yup. I use my shampoo to turn myself into a magical unicorn. Because I'm awesome. Try not to be jealous.

PPS this totally counts as a Throw Back Thursday entry since I included I picture of young and impressionable me.
- February 27, 2014 No comments:

Snowmageddon 2014: The end will be COLD

Snowpocalypse, how about Snowragnarok? Snowtaclysm? Snowlocaust? Get me a thesaurus and I'll do this all day long because anything is better than naming storms. Damn you Weather Channel! Damn you straight to Hell.

If you own a TV you have heard about the East coast's epic snow storm. (Polar Vortex) The second in the past few weeks. Certainly you saw the footage of the Atlanta traffic jam or you heard about the school closings?

The internet is awash with cartoons and angry responses. Northerners laughing at Southerners who can't handle two inches of snow. Southerners calling Northerners meanie heads and other equally hurtful names.

So far my kids have missed 6 days of school.

This isn't a bash the South blog though. Lets be honest people. Driving in the snow is a skill  and if you have never done it you aren't going to be aces your first time out. But then I guess that is my point.

DON'T LEAVE YOUR HOUSE IF THERE IS SNOW ON THE GROUND!!!

You know one tiny little inch causes people to freak out so stay the hell home.

What about the people who can't stay home? Like Doctors and Firefighters?

Fine. That is what? Like 5% of the population? Get yourself a 4x4 and go to work and thank you for being there if I need you.

I'm looking at you Bread and Milk people! STAY HOME. What the hell are you doing with all that stuff anyway?

Same goes for you lady who can't miss her nail appointment. You can and you should.

Today is not the day to run out and grab a quick bite to eat.

OMG I forgot I don't have any cumin!

Seriously. I will slap you. STAY HOME.

Get cozy. Maybe turn on your free Netflix trial. Snow days are perfect for TV marathons. May I suggest the BBC's Sherlock. Then you can join in the Internet's obsession with Benedict Cumberbatch.

In the mean time I will be shovelling. UGH! Something I though I was done with when I moved down here. 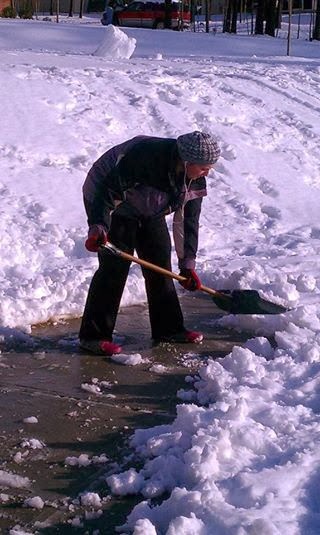 It wasn't all bad though. The kids got to build an actual snowman. 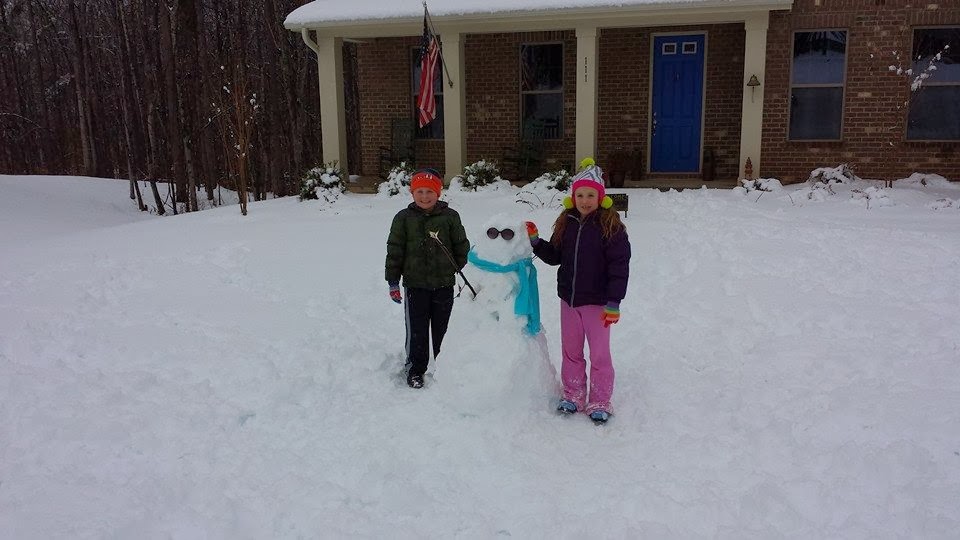 Yeah he's wearing sunglasses. It was bright out and I don't have any coal. Wait. Maybe I should head to the store to get some?

That was a test. If you just yelled at me to stay home then you have learned something today. Now go forth and share your new knowledge with all of your friends.

Tales from The Preschool

In the past I have talked about being a teacher and all the funny stuff, I mean all the educational stuff we do.

Remember when I taught the kids to keep "one hand for the ship."? Epic.

This week my success is measured in the words of one of my sweet students.

Student: (hand raised) "Miss Ronnie, I have a statement."

He said that because when we are all gathered round in the morning to talk about the letters, shapes, colors, the calender, the weather, dogs and daughters, (no big whoop) and who is going to Hilton Head that weekend a lot of hands interrupt my knowledge imparting.

Now I'm totally cool with questions (even off topic ones that involve why Miss Ronnie wears so many Batman shirts) but I'm not a fan of random stories.

How cruel. They are just little kids. Let them share their joy.

Chill! I totally let them share, sometimes overshare, just not during 'circle time'. That's what people in the know call it.

I ask them if they have a question; something that needs an answer from me. Or a statement; a story they just want to tell the class.

They say you have to repeat something like a thousand times before a child gets it. (that's science!) I thought I was only in the 900's but I guess I lost count somewhere or this little boy is just a child prodigy the likes of a Doogie Howser.