Unless you all suddenly decide to desert me this post will mean my blog has been visited more than 5,000 times. I'd like to think that was 5,000 people but I know it is probably only about 50 people checking back sporadically and a bunch of spam bots.

In this momentous post you are going to get two random things.

Part of the awesomeness of not drinking is I don't fear the police.

Out to dinner with some Gym Rats the other night we were called into the parking lot because hooligans had broken into one of our ladies cars and stolen her gym bag.

I won't go into why this was an epically stupid idea. Is there a black market for smelly sneakers and sweaty towels?

It was obvious from the police man's questions and the time of night that while the officer was trying to investigate the crime he was also trying to make sure anyone that was going to be driving could do so safely.

In case you weren't aware I'm pretty obnoxious. I don't turn this off in the presence of the law because I never have anything to fear.

Side note: As responsible adults there were enough DD's to take care of anyone that wanted to indulge. 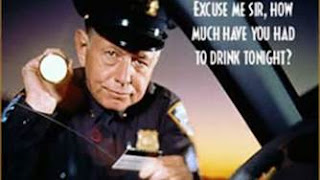 If you've had one drink you tend to behave in front of the police because while you know you are under the limit you never want to push your luck.  I don't care. I make jokes and laugh loudly. I even tripped over my own shoes. (Not intentionally I'm just uncoordinated.)

Should he have deemed me a concern there was no fear on my part that I wouldn't pass a field sobriety test so I got to be me. Over the top. Loud and obnoxious.

The subject of twitter came up at the above mentioned dinner and I admitted that I tweet. (Even I hate the way that sounds.)

I was told I needed to follow Richard Marx. You remember him. Singer from the 80's.

So I checked him out and hit the big green follow button. Then this awesomeness happened.