What was that test you could take that would tell you what you were supposed to be when you grow up?

I think I was out that day. For some reason I thought boat college was a good idea.

I guess it kind of was. I did meet Triple S there and we do have two beautiful kids and we have been happily married for 13 years...

Sorry I got sidetracked for a minute.

The other day I was talking to a friend and they told me:

That is at least the fourth time someone has said that to me.

You can look at this a few different ways.

Maybe I know a lot of crazies? TRUE

I think it says more about my poor career choice.

Strangers tell me the most intimate details of their lives. (in elevators, in line at the grocery store, at the gym, in the ladies room)

Plus I look good sitting in a chair with a pad of paper on my lap.

I'm going to see what the University of Phoenix can do for me.

Never mind. That's a lot of work and now that I think about it yelling at people to "SUCK IT UP" probably isn't part of the Hippocratic oath.

So I'm not dead and that's a good thing. I do however look like I was taken hostage.

It wasn't raining. It wasn't too cold and I hadn't seen a single lady ab in sight. All and all a good start to the race. I was feeling reasonably confidant. After all I did show up and wasn't that half the battle? (it's possible I'm confusing GI Joe with my 'motivations' calender)

This was of course all before we hit the first obstacle. I'm not going to describe them all. No one needs a lame play by play. Plus it wasn't like I could take pictures of them. But.....

Then I found my shoe so it was all good.

Then I got wet, that was okay.

Then I got really dirty.

Then there was barbed wire.

Then there was MUD.

We aren't talking pretty brown mud that you put in your garden. No Sir! This is Carolina red clay and it is slippery and heavy and it stains everything!


So I ran, climbed, carried, pulled, crawled, walked and did some burpies. When they day was done I had missed only 3 out of 17 obstacles and traveled 4+ miles.

But I didn't quit, hell I didn't even stop smiling. So I guess I am a bit of a sadomasochist because it was fun.


And hell yeah I jumped the fire! AROOOOOO!!
(Spartan Battle Cry, or at least the Spartan Race Battle Cry) 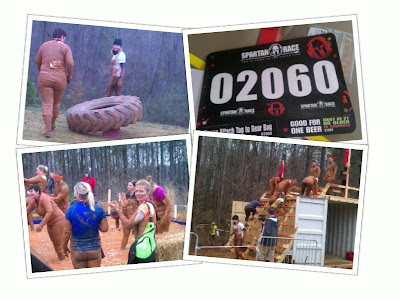 fun fact: I weighed the bag of clothes I took off after the race. They were wet and covered in mud.

13 pounds! I was carrying around an extra 13 pounds.

Maybe I should have gone to the hose off station?

If you want to see e crawling through the mud.....

If you are reading this I might already be dead.

The Spartan Race is tomorrow and I'm scared.

People keep telling me I'll do fine but I'm pretty sure they are lying. Their eyes keep darting to the left when they talk. I watch crime procedurals. That's a tell along with something called a micro-expression.

I also know bleach can't get rid of blood stains but I haven't tested that out.

New information of the "race" is that the first obstacle is a river which is swollen thanks to all the rain we've gotten in the last few weeks.


Did you know the average temp for March in NC is actually 57?

Not the 35 that is predicted!

There is a fire at the finish line. I figure by then I might be more inclined to hang out and warm up then to jump over it.

The only good part about the weather is I figure it might level the playing field a tiny bit. I am from up North. Once I went scuba diving in DECEMBER on CAPE COD! Certainly not one of my most brilliant ideas but I did it. Not to mention I owned a snow blower because I lived in a place that got enough snow to need one. So I'm cool with the cold. (pun intended)

Or these are all lies I keep telling myself so that I won't break down and cry.

The other good thing about the cold (still trying to convince myself it is a good thing that it wont be 60 and sunny) is the lack of exposed skin. Confused?

I don't want to be stuck running behind Lady Abs!  I seriously doubt these women are human. Certainly they have never polished off an entire sleeve of girl scout cookies.


They say I will "know when I'm at the finish". I'm not sure if that's true. You know one of the side effects of hypothermia is hallucinations so there's a good chance I might think I'm on the bridge of the Star Ship Enterprise.

So if you are reading this on Saturday, know that I lived a good life and that I'm going to a better place. (Probably another lie but it's getting harder to tell)

This is NASCAR Country

In truth I have no idea what that means.

It's weird really. I live in "Race City, USA". The police cars have checkered flags running down their sides. There is a Pit Row training school only a few miles away from my house.

When I drive around town I see lots of signs for "NASCAR memorabilia".

Friends talk about what "number" they are cheering for. I smile and nod when they talk about this weekend's race. Once Triple S and I even watched the last few laps so we could be included in the conversation the next day.

Prior to that the only conversation  Triple S and I had about NASCAR was about my want to participate in a driver experience package. Not because I like a certain driver but I have some serious speed issues.

Me- "Shhh, I'm gonna take this curve in 4th I need to concentrate."

We know mechanics and engineers and lots of other support staff. I occasionally hear stories about other people seeing this driver and that out and about around town.

I could names names but it is only going to give you proof that I know nothing about this stuff.

Okay so back to the point of this post.

As you know if you read this blog I started working this year at a preschool.  It's been awesome so far. The kids are great and the teachers are great. Plus I'm shaping the future. (isn't that what they say about educators?)

One of the young minds I'm shaping this year is the child of a driver. A sweet and wonderful 4 year old. I won't tell you his/her name or the name of their father. I don't want to exploit them. That isn't the point of this.

The point is that everything I know about NASCAR I have learned from a 4 year old.

The other day a few friends were talking about the past weekend race and I interjected some comments and realized the only reason I had the information was thanks to this small child.

Did you know there was a crash this weekend and that all the drivers had to get out of their cars?

Did you know that you can get ice cream at pit row?

Did you know they have a costume contest at the track on Halloween?

This wonderful little child tells me all about the ins and out of racing. And maybe a few behind the scenes tidbits too.

So if we are talking about racing and I mention something and it sounds a little bit off just try and remember my source.
- March 08, 2013 No comments: