So Triple S flew home from the tugboat yesterday. While he was hanging at the CLT airport waiting for his ride he found a lost phone. I told him to use the white courtesy phone and page the owner but apparently that isn't an option anymore.

He tried texted someone called "sweetie" assuming they might be able to help but they didn't respond.

So this morning I tried to contact them again only to realize the phone was shut off.

I checked email, the address book, the navigation. I was hoping for something that could lead me to the owner.

The phone isn't new. It is a 3 year old HTC and it certainly isn't worth anything but I couldn't help but think about how awesome I would feel if it was mine and it was returned.

Google to the rescue!!

I found enough facts to find an address. It's in the mail on the way back to it's owner. Of course I left a super obnoxious note along with it. 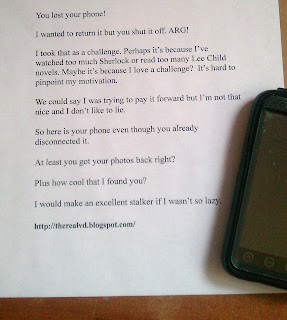